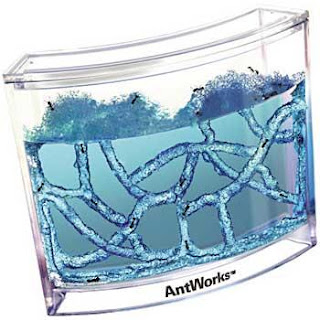 I recently read about Antworks and found some sites who sell them, so I
bought one. The idea seemed very interesting and maybe entertaining.
After I received the package, I was a little disappointed because it was
made of plastics. Then I went near a forest to pick up some ants. I
managed to get 5 big ones, but they started to fight so I dismissed them
and looked for smaller ones. I found small ants and surprisingly they
were escaping through the air holes, which I had to fill up. By the next
day, some of the little ants were dead and the rest were very lethargic.
I released them and looked for medium sized ants. I found a couple,
about 11. The next day, there was a little digging but the ants started
to fight, some died and the rest were weak. So the antworks was a total
failure, it is now sitting empty and I don't know if I should try
another type of ants or just give up.
Posted by Ana Aman at 8:14 AM

Email ThisBlogThis!Share to TwitterShare to FacebookShare to Pinterest
Labels: nature

you need a queen to command the drones.