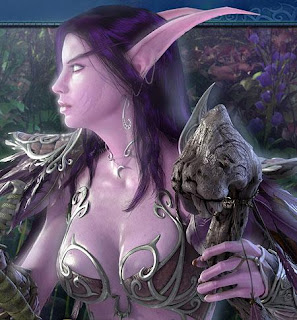 I guess that few players of low levels (lower than 35, let's say) are desperate to put their hands on some more gold, as the completion of quests and instances assure the cash flow needed for training and repairments. The exceptions are made, however, by those who long to have a "always elite" character, equipped in all blues even at level 20, but if they can do that, i have nothing to help them
further with ;) .

The real gold crisis kicks in when the so-anticipated level 40 is very near, and suddenly the huge 90g required fro the mount and riding skill seem an impossible sum to get. And indeed is,at least before gaining another 2 or more levels, for the most of us. Of course, one may be part of a more generous kind of guild, but for the do-it-yourselves it's pretty hard to get al those money, plus the gold needed to train the skills available at lvl 40. I must note that i've been in this point with six of my characters, but the alts (3 of them) had an easier
time, as the sparable gold from the level 60 was reserved for this matter.

The 3 mains were the ones that got their mounts with a couple levels late, because of the above mentioned lack of gold. Among the 3 classes - rogue, driud, mage - the rogue was the first, tough, at merely level 41, due to the class skills and to the blind luck she got, nice droppings and all; but that was quite some time ago, and i'm sure things have changed for the rogues...All in all, the rogue was the one that i farmed alot with too, hence the "lucky" part, as the more you kill, the
more your chance of getting goodies increases ( which i don't necessarily find very appealing ), hence the good money flow. She had the skinning and tailoring trade skills back then, but the only useful one was the first and which, i must say, was quite a gold mine in STV, with all the beasts there. But that was before Stranglethorn became a non-stop combat zone on pvp servers (my case), so i wouldn't advise to try your luck there, unless it's a midweek morning, you have like 10 level 60 friends protecting you or you're a masochist. For the pve servers, tough, the place is very good for farming, especially if you're a skinner or herbalist (there are the so precious khadgar's whiskers and the rare steelbloom, but i guess you have to hunt a good deal too in order to sell these in a good profit; an alchemist would understand why i call them this way). If you don't have either skill, you might want to pick on the lower level pirates just outside Booty Bay (left), but , as i said before, if it isn't a low population time of the day, you won't get many chances.

Badlands is a fair good option for gold farming, too and it also has the advantage of not being highly crowded. The shadowforge dwarves near the angorforge keep (36-39) , the ogres or the troggs on the south side and center drop silk, mageweave and cash. However, my favs are the rock elementals, as on my server at that time the earth elemental was selling good and i could easily make a stack in a little over one hour. The core of earth, however, is nothing you could aim for, because of the low droprate, and you should consider yourself very lucky if you get this at under lvl 40. The vendor trash is quite good too, not to mention the solid stone, which you can auction (if the server AH allows a good price, if not, just vendor it too). Anyway, the elementals medium value is higher than the above humanoids' , so if you don't need the cloth they drop, you should kill the rocks. For me there also is the "boring" factor, which makes me change my "victims" from time to time, but for someone focused on getting gold and only gold, this is the ideal mob in Badlands. This is the moment to point out i'm only reffering to solo farming, the group part is obviously changing this completely, making it a lot easier and faster and if the group consists in one or more level 60, even bringing into discution instances with a 'fatter' loot.

Desolace is another , well, desolate place where you can get those coins. The centaurs, the satyrs in north and the skellys in Valley of Bones drop lots of silk, some mageweave, some silver and the respawn rate is high enough to keep you moving all the time.

The most important thing to remember, i think, is the total gain you get from farming a particular zone/mob. Not only the gold you get counts, but the quests completed there also (which equal gold again,one way or another, and some decent experience) , the specific mats you're after for your own benefit, maybe crafting a nice armor piece or weapon suitable for your level, even the reputation aspects counts at higher levels; the zone targeted might have some resources you could gather while farming, making this even more profit-making, so in the long run, even if the mobs aren't quite as good as others, the sum of gold you get is at least equal to that you could have got in another place, maybe an instance. Try to maximize the benefit from one kill, don't switch between the zones too often, as the time spent flying equals 0 gold, keep in mind that you are supposed to have fun in this game and if you're not, just stop what you're doing and do something else, even if it means logging off.
Posted by Ana Aman at 4:11 AM

Email ThisBlogThis!Share to TwitterShare to FacebookShare to Pinterest
Labels: games

That was an interesting blog dude. Thanks for sharing such interesting info about the WOW games. I too like the game very much. I knew nothing about the game. Later my suggested the Leveling Guides through which I learnt and got more information about the World of warcraft game. Now It is one my favorite game.